Around the same time, Hitachi approached us with a proposal of a joint research on the next generation microprocessor development. Japanese semiconductor manufacturers started to think about producing their own microprocessors while watching the start of the microprocessor business of Intel and Motorola back then.

However, the U.S. was watching the moves of the Japanese manufacturers which became competitive in the fields such as information processing, and they started to become concerned with intellectual property greatly.

In the mid-1980s, people started to be slowly grasping the importance of microprocessor as the next generation core technology of computer industry. Based on the reflection of so-called “Industrial espionage scandal,” Japanese industrial players settled on to develop TRON specification CPU which is based on an original architecture.

Mr. Kimbara, a member of board of directors of Hitachi emphasized the importance of open partnership, and increasing number of companies including Fujitsu, Mitsubishi, Toshiba, Oki and Panasonic began developing TRON VLSI CPU chip. I designed only the fundamental architecture, which is called the instruction set, and each company designed the circuit for implementation to differentiate each company’s offering. That was the fundamental policy and worked well.

Applicant developers could write programs without selecting a chip at the beginning. They needed to select a CPU chip depending on the required performance when they finally started to mass-produce final products. That was good for users as they could select chips according to the price and performance requirements. This business model actually became the business model of ARM in the UK. Chip developers had to compete by developing chips that had an advantage or two. Japanese semiconductor business of the time was on the rise, and manufactures were enthusiastic about the development. Young developers worked very hard. There was no negative move to tie users into their proprietary chips. Thus, the next generation standard microprocessor was born.

However, there was a slight difference between Hitachi and Fujitsu Group and me about the vision of how the microprocessor could be applied. In my opinion, microprocessor’s main application field was embedded systems. Besides, in my view, many objects would be equipped with CPU in the future. What is now called the Internet of Things (IoT) and Machine to Machine (M2M)―so-called ubiquitous computing was on my mind as application already. I thought the most important usage of microprocessor back then was PC. So I insisted repeatedly “Even though the chip inside is completely different, the pin layout should be compatible with Intel,” “Endian (memory arrangement format of multi-byte data) needs to be little-endian, too” and so on. However, manufacturers planned to make lower-models of IBM-compatible mainframe machines that were successful at that time by using TRON chip, so they concentrated on producing large-scale and high-performance chips. Endian was IBM’s big-endian mainframe CPU. The pin layout was completely different from Intel chips. These were big differences.

Back then, Japanese semiconductor manufacturers had strong development power, and made chips technically better than Intel’s latest ones. For example, Fujitsu GMICRO300 had higher integration and performance than Intel chip of the day. But the department which produced PCs and the one produced mainframe computers were different. NEC PC-9800 series was very successful in the PC field at that time, so manufacturers started producing PC by adopting Intel’s x86 architecture to compete with NEC. Such development did not synchronize with their mainframe computer teams. Many outside developers said that they could not use GMICRO chip which had good performance but did not fit with the peripheral chips for Intel PCs.

It was unfortunate that the large-scale and high-performance-oriented TRON VLSI CPU chips went out of use with the fading of mainframe computers. They were used only for very critical but relatively speaking a small number of installations such as NTT’s switching systems and spacecraft. I think I significantly contributed to nurturing Japanese developers and giving them confidence by having developed 32-bit microprocessor, the world’s most advanced microprocessor of the time by themselves. 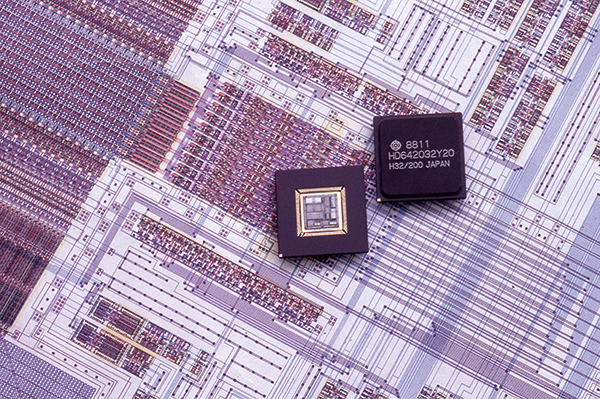